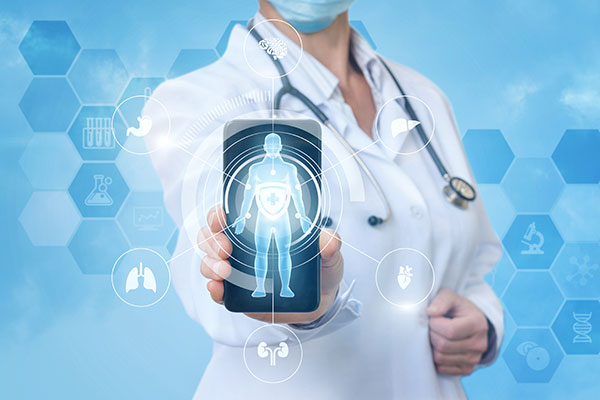 More than 2,000 years ago, Hippocrates said the gut is the basis of all health. Today, researchers are confirming Hippocrates’ idea. More than two thirds of an individual’s immune system depends on his or her gut health. A healthy gut allows a person to both fight disease and extract critical nutrition from food. A leaky gut, a weakened barrier between the molecules in the gut and the rest of the body, can leave a person vulnerable to infections, autoimmune conditions, food allergies, and malabsorption of nutrients.

Unfortunately, having a leaky gut, also referred to as increased intestinal permeability, has become the norm in modern times—at least in Western societies. As a result, there has been a significant uptick in health concerns related to leaky gut—both from the medical community and from patients who are now more aware of this condition and its connection to other health concerns.

What is Leaky Gut?

The term leaky gut, or intestinal permeability as it’s referred to in the medical community, identifies an increasingly pervasive health condition in which the lining of the small intestine is more permeable than it should be and is affected by various irritants. The normally tight junctions between the epithelial cells separate to allow entry of toxic material into the bloodstream that would, in healthier circumstances, be repelled and eliminated. The gut becomes “leaky” in the sense that bacteria, viruses, fungi, parasites and their toxins, and undigested food particles, chemical toxins, and waste normally not absorbed into the bloodstream in the healthy state, pass through a damaged, hyperpermeable, lining. 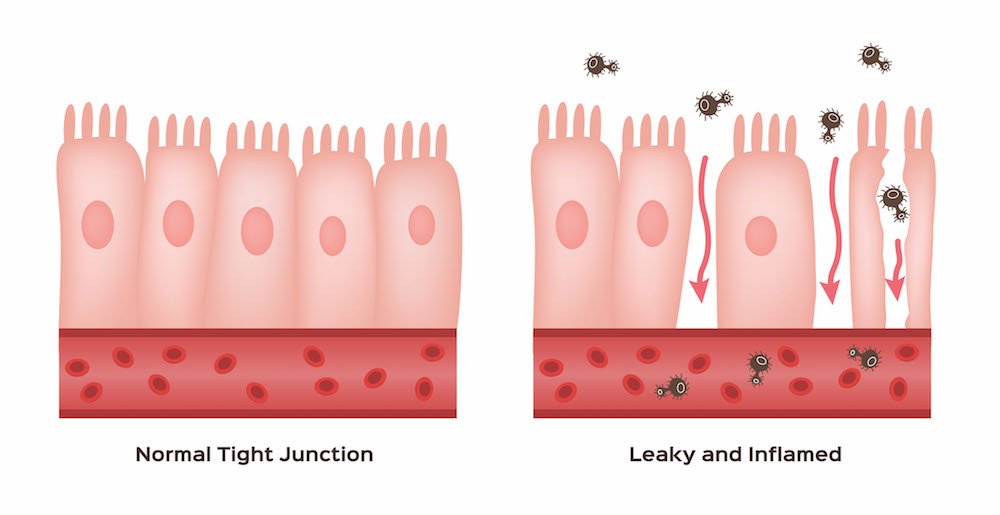 Could You Already Have Leaky Gut?

Most likely, YES. Most Americans have this condition by virtue of living in an industrialized nation and more often than not, consuming the Standard American Diet (SAD) with all its processed, high-glycemic, and low-nutrient foods. Leaky gut manifests in many, sometimes vague, symptoms that are common to other conditions. Here are some of the more common signs and symptoms:

Leaky gut is often self-inflicted, but generally unintentional. Lifestyle factors that irritate the G.I. lining, disrupt the gut microbiome, and loosen the tight junctions can be changed by making substantial changes to your daily habits. Environmental factors are less modifiable, however, because you don’t have as much personal control over them as you do with your own health behaviors. Your goal should be to modify what you can, and be aware of what you cannot.

How Is Leaky Gut Diagnosed?

Doctors regularly test for food sensitivities, which can be considered a proxy for a leaky gut. A Food Sensitivities Test analyzes a patient’s blood sample for antibodies. A specific antibody will exist in the blood only if the body encountered a foreign substance and initiated an immune response to attack and destroy it. If someone is sensitive to a food, it’s because the food crossed the gut barrier and got into the bloodstream. A person would not be sensitive to it otherwise. This low-cost test requires a small blood sample from a fingerstick; these tests can also be obtained without a doctor’s prescription and are available online.

A more useful tool to measure the degree of intestinal permeability is the Zonulin Test. This test is utilized in clinical research and was discovered in 2000 by Alessio Fasano, M.D. at the University of Maryland School of Medicine. The amount of zonulin is analyzed in a blood sample obtained from a blood draw (not a fingerstick); zonulin can also be measured in a stool sample. The Zonulin Test requires a doctor’s prescription.

Explosion of Health Issues Linked to the Gut

The incidence of health conditions linked to leaky gut has exploded, particularly now that doctors recognize the connection between gut health and immune health. Often times, the process begins with an infection (i.e., food poisoning) that disrupts the balance of microbes living in the gut. Candida albicans, rotavirus, cryptosporidium, C. difficile, E. coli, salmonella, and shigella are some of the more common infections that contribute to leaky gut. The gut loses protection from beneficial bacteria, the lining is irritated an inflamed, and this contributes to the breakdown and compromise of gut’s natural barrier with the bloodstream. In turn, too much permeability disrupts the immune system’s normal function; this ongoing malfunction leads to cellular, tissue, and organ damage – all of which are more aptly described as autoimmune health issues.

But, What if I Already Eat Healthy and Exercise Regularly?

Even people who live a healthy lifestyle and exercise regularly can experience leaky gut. Increased intestinal permeability is common in elite athletes who engage in long bouts of rigorous exercise, especially long-distance runners, ultra marathoner, and triathletes. This can also increase their susceptibility to upper respiratory tract infections. Continuing to follow a healthy lifestyle is important, but there’s one additional step everyone can take to ensure the best gut health possible—take powdered BOVINE COLOSTRUM every day.

The good news is that over the millennia, mothers’ colostrum has always played a fundamental role in addressing gut-related conditions. When a baby is born, he/she has an incomplete or immature stomach and gastrointestinal tract. Essentially, the infant has a leaky gut for the first few days of life, and it is not only intentional but important.  An immature G.I. tract allows the colostrum—the first substance that comes in when an infant suckles its mother’s breast—to freely enter the bloodstream via a permeable gut lining. Colostrum is sometimes referred to as “first milk,” but this is actually a misnomer because it is not breast milk.

An infant’s body is primed to develop a well-functioning immune system once the colostrum transfer takes place, and not before. However, colostrum’s benefit to the immune system is not limited to infants. Colostrum can perform its immune-enhancement whether a person is 80 years or 10 minutes old—it’s the same functional process. And in fact, supplementing with colostrum down the road can have a very positive effect on one’s health, particularly if he or she did not receive the benefits of colostrum or breast milk.

A mother’s colostrum also contains growth factors that close the leaky gut. After about 72 hours, the G.I. tract is “matured” or completely sealed up from its previously permeable state. The importance of this maturing processes is so that when breast milk comes is expressed later in that first week, the milk won’t transfer into the bloodstream and create an allergy to the mother’s milk. If mothers don’t breastfeed children and don’t continue to breastfeed through the first one or two years of the child’s life, that child may be more likely to develop leaky gut later in life. Leaky gut can last a lifetime… or at least until a time in which colostrum’s immune bioactives and growth factors are reintroduced into the diet.

Bovine (cow) colostrum is a multi-faceted nutritional supplement which replenishes the growth factors and immune bioactives that help prevent leaky gut and balance the microbiome. In fact, clinical research proves that powdered bovine colostrum repairs intestinal permeability in humans and can be used to prevent leaky gut; of course, you’ll need to modify any antagonist lifestyle factors. Twice daily supplementation is recommended as the ideal way to keep leaky gut at bay and to support immune health. NOTE: bovine colostrum is not cow’s milk, and commercial colostrum supplements are made from excess colostrum; no calves are deprived of their mothers’ colostrum.

Some of the earliest studies on colostrum as a supplement for leaky gut began in pigs. In 1998, researchers teamed up with pig farmers in Malaysia. The pigs were fed a hydrochloric acid mix to simulate human ulcers, and then underwent endoscopies to get a baseline image of the damaged GI tract. Afterwards, half of the pigs were fed colostrum. Not only did the colostrum repair existing damage, but also prevented further damage from the hydrochloric acid, and increased the villi height by 20%. The colostrum improved nutrition uptake in the pigs, which convinced farmers to start using antibiotic-free feed. The result was healthier pigs with more lean meat which fetched higher prices at the market.

After the animal model study, colostrum was tested in two major clinical studies in humans. These were published in the renown journals, Gut and Clinical Science. The human trials saw the same benefit from colostrum., The human trials did not use hydrochloric acid or excess stomach acid as G.I. antagonists, but an NSAID pain medication. Utilizing endoscopy, it was clear that bovine colostrum could provide a novel, inexpensive approach for the prevention and treatment of the injurious effects of NSAIDs on the gut, and was of potential value for the treatment of other ulcerative conditions of the bowel. A decade later, it was shown that bovine colostrum could truncate the increase in gut permeability which occurs with heavy exercise. The human trials were conducted by Raymond Playford, M.D., one of the early researchers in this field who continues to influence the use of bovine colostrum today.