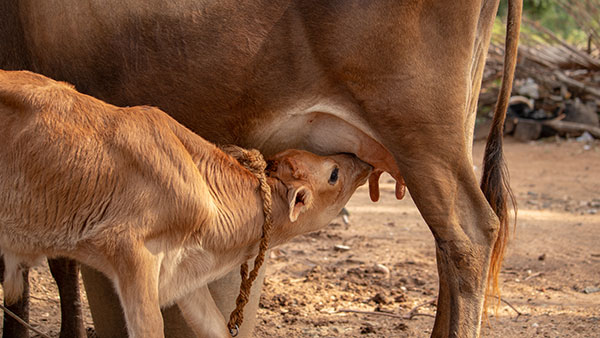 First and foremost, colostrum is NOT milk, although it is often referred to as “pre-milk.” Instead, colostrum is its own unique secretion expressed from the breast of female mammals for about 72 hours following the birth of her offspring. It is considered the “first food of life” for all animal mammals. For humans, colostrum is often looked upon as a mother’s gift to her newborn child. Colostrum’s biological function is to seal up the microscopic holes in the newborn’s gastrointestinal tract (i.e., to heal the “leaky gut”), but not before it transfers immune bioactives (i.e., to jumpstart the immune system) and good bacteria (i.e., to help seed the G.I. tract). Mammals, outside of humans, will not survive if they don’t receive colostrum, so this “first food of life” is the “gift of life” for them. This shows just how important colostrum is to a species’ survival, and it conveys a message of health and healing for humans.

What is bovine colostrum?

Bovine colostrum is colostrum that comes from cows. Colostrum from other mammals is known by different names, such as capra (goat) or ovine (sheep). Cows produce an overabundance of colostrum, a great deal of which is well beyond the calf’s needs, and this is what is processed into powdered supplements for human use. Capra colostrum is thought to be more biocompatible than bovine colostrum, but the relatively small supply of capra colostrum hampers its widespread availability; bovine colostrum is plentiful due to the vastness of the dairy industry in the West.

What are the health benefits of bovine colostrum?

Among the most important health benefits of bovine colostrum are healing and preventing leaky gut, improving immune health, and building muscle, bone, and other tissue. The modern lifestyle – inactivity, poor nutrition, and compromised immunity due to unhealthy behaviors – combined with drugs, chemicals, pollution, and environmental toxins present an on-going battle within the human body. This is evidenced by the exploding prevalence of modern-day health problems, from type 2 diabetes to irritable bowel disease to arthritis to mental illness and neurocognitive decline. Most people are unaware that many autoimmune and chronic diseases can be tied to leaky gut and toxin overload. More and more research is showing the positive effect bovine colostrum exerts for the remediation of leaky gut.

It is however, important to note that bovine, or any other type of colostrum, is not a magic bullet. It can only be effective when it’s part of an all-inclusive health/lifestyle program. That means (1) regular physical activity; (2) good nutrition; and (3) most importantly, avoiding the primary causes of leaky gut (i.e., unnecessary antibiotics, pain medications, GMO foods, glyphosate-contaminated foods, refined carbohydrates, sodas, and excessive alcohol consumption.) In other words, colostrum won’t do much good if you continue to abuse your body and feed it the Standard American Diet.

What are the historical uses of bovine colostrum?

Milk and colostrum from ruminant animals (cows, sheep, goats, camels, yaks) was the mainstay of the human diet ever since these animals were domesticated. They often lived within the family shelter (or very close to it) and provided year-round sustenance. The infectious diseases that humans experienced were passed on to their livestock and although the animals did not get sick, they developed antibodies when would be expressed in their colostrum and milk.

So, bovine colostrum had been utilized as a medical food long before people understood what a medical food was. Because of its high immunoglobulin content and antibodies to various bacterial and viral pathogens, colostrum makes the ideal “natural vaccine.” In fact, some vaccines, such as one of the polio vaccines developed by Albert Sabin, have their origins in colostrum’s immunoglobulins. Broadly speaking, this is the concept of “immune milk,” or more specifically, “immune colostrum,” as the content of immune bioactives in bovine colostrum is substantially higher than in raw bovine milk. It’s also the rationale behind the movement to consume raw milk and dairy products. In this sense, milk (and colostrum) does a body good… very good.

What is in bovine colostrum?

Depending on whom you ask, the actual number of unique components in bovine colostrum ranges from 200 to as many as 1000. This is due to the various immunoglobulins and antibodies. The broadest of categories are “immune bioactives” and “growth factors.” This reflects the components that affect or regulate the immune system (“immune bioactives”) and those that promote cellular and tissue growth (“growth factors’). These can be subdivided further for a more complete understanding of what colostrum can offer as a nutritional supplement. Douglas A. Wyatt, an expert on the use of bovine colostrum in human health, has compiled a comprehensive list of components. {link to list}